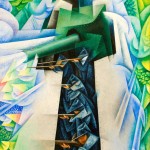 One of my favorite paintings.

Painted in 1915, the year Italy entered World War I, this work reflects a Futurist declaration of the same year: “War is a motor for art.” Although poor health prevented Severini from enlisting in the military, he was obsessed by this first fully mechanized war. Living in Paris, he witnessed the city’s bombardment, and from his studio he had an aerial view of the Denfert-Rochereau station and trains transporting soldiers, supplies, and weapons. Here, five faceless figures crouch in a militarized locomotive car, aiming their rifles in unison. Smoke from gun and canon fire eclipse the natural landscape. Severini celebrated war, which the Futurists believed could generate a new Italian identity—one of military and cultural power.

This site uses Akismet to reduce spam. Learn how your comment data is processed.